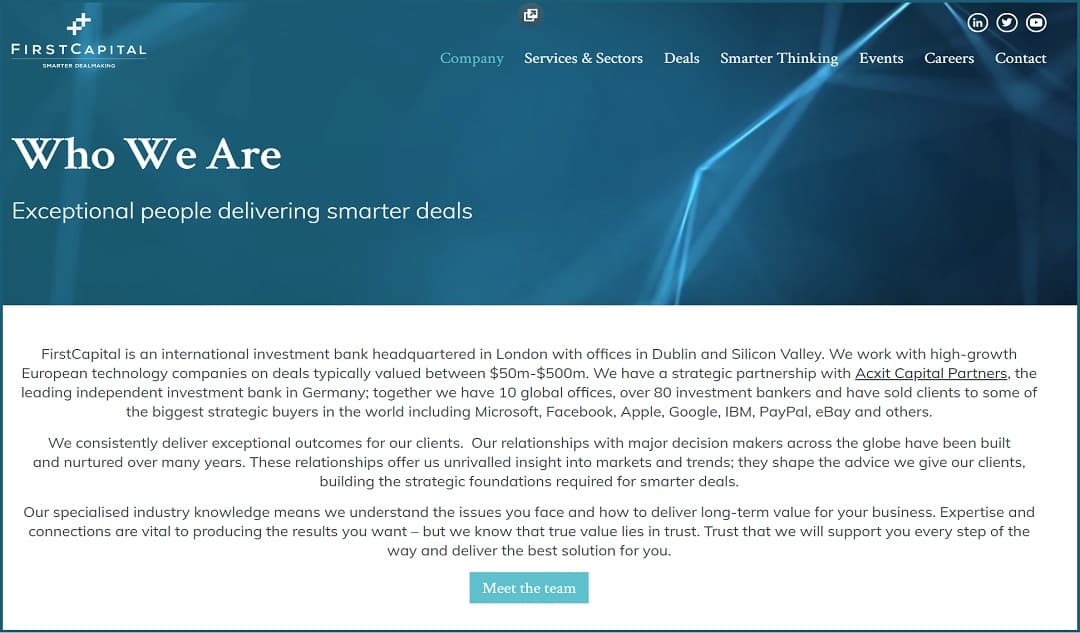 "“FirstCapital were looking for a long-term relationship with a trusted partner who could help us move forward with our use of Dynamics and Rocket CRM were recommended to us. They performed a discovery where they assessed our use of Dynamics and put forward a proposal for the move to the Unified Interface and for the replacement of existing custom code which was implemented successfully. They listened to our requirements and put together a road map for the future support and development of our system. They continue to provide excellent support and we would highly recommend them”.

Streamlined, fast CRM built on the Microsoft Power Platform
Migration to the new Unified Interface
Reduction in license costs
Increased user adoption
Reduction in the complexity of the system

FirstCapital is an international investment bank. From their offices in London, Silicon Valley and Dublin, they advise high-growth technology companies on mergers and acquisitions, private equity and growth capital transactions. They’ve sold clients to some of the biggest tech companies in the world and dealt with many of the leading global tech investors.

FirstCapital contacted Rocket CRM with a request to help to streamline their system and provide Dynamics 365 managed service, support and licensing. Rocket CRM performed a discovery, which highlighted that FirstCapital were using a legacy interface of Dynamics CRM and were about to be switched over to the new Unified Interface. Rocket CRM worked alongside FirstCapital to transition the move to the new Unified Interface and replace the existing custom code using a combination of standard configuration and 3rd party products in order to simplify and future proof the Dynamics system. The brief was to keep the user interface as simple as possible and Rocket CRM achieved this by configuring a FirstCapital app with only the components that were required.

Rocket CRM also advised FirstCapital around the license requirements for Dynamics and as such, FirstCapital were able to reduce their monthly cost whilst providing the end users with the same functionality.

Future phases include integrating SharePoint & Microsoft Teams as well as working on some improved reporting for the business.

We were recommended to FirstCapital by another one of our happy customers. We actually get most of our business through recommendations from satisfied customers.
FirstCapital were very interested in the managed service contract offered by Rocket CRM so that they could be freed up to concentrate on core business activities.

Ready to find out more?

Drop us a line today to find out more